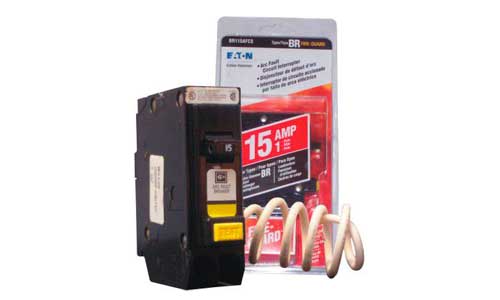 What is an Arc Fault?

Most people are familiar with the term arcing. Arcing may be intended, such as with an arc welder or unintended, such as when a tree falls on a power line during a storm creating a current discharge between conductors or to the ground.

An arc fault is an unintended arc created by current flowing through an unplanned path. Arcing creates high intensity heating at the point of the arc resulting in burning particles that may easily ignite surrounding material, such as wood framing or insulation. The temperatures of these arcs can exceed 10,000 degrees Fahrenheit.

Why do we really need Arc Fault Circuit Interrupters (AFCIs)?

Smoke alarms, fire extinguishers and escape ladders are all examples of emergency equipment used in homes to take action when a fire occurs. An AFCI is a product that is designed to detect a wide range of arcing electrical faults to help reduce the electrical system from being an ignition source of a fire. Conventional overcurrent protective devices do not detect low level hazardous arcing currents that have the potential to initiate electrical fires. It is well known that electrical fires do exist and take many lives and damage or destroy significant amounts of property. Electrical fires can be a silent killer occurring in areas of the home that are hidden from view and early detection. The objective is to protect the circuit in a manner that will reduce its chances of being a source of an electrical fire.

How is an Arc Fault detected?

Unlike a standard circuit breaker detecting overloads and short circuits, an AFCI utilizes advanced electronic technology to “sense” the different arcing conditions. While there are different technologies employed to measure arcs by the various AFCI manufacturers, the end result is the same, detecting parallel arcs (line to line, line to neutral and line to ground) and/or series arcs (arcing in series with one of the conductors).